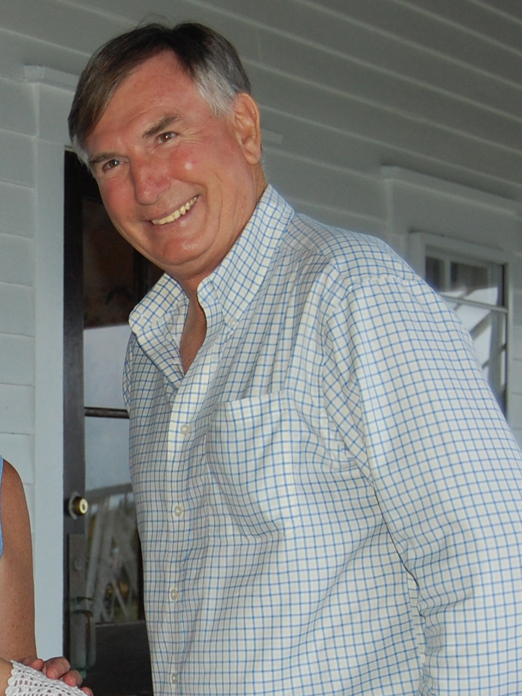 Alan Costain Elwell, age 78, of Stamford, CT and Block Island, RI, passed away in the morning hours of January 3rd, 2019 after a long battle with cancer. He was loved and respected by many for his friendship, wit and ability to see things from a different perspective.

Alan was born in Bath, England to Thomas Harold Elwell and Peggy Thompson Elwell. He spent his youth in the Gareloch & Loch Lomond, Scotland during the Second World War and after the war with his grandfather on the Isle of Man, UK. He emigrated to the United States with his brother Lance in 1948 to join his parents who had come to the US a year earlier; first living in New Jersey then settling down on Long Island. He spent much of his youth sailing the Great South Bay where he enjoyed exploring and messing about in small boats.

Alan graduated from Trinity College in Hartford CT where he studied history and played tight end on the football team. He stayed in touch with his teammates and classmates throughout his life.

His career was in reinsurance and was widely respected in his field, starting A.C. Elwell Co. in 1984. He was an avid and accomplished sailor, participating in two Bermuda Races amongst many others. His pleasure involved history and anything having to do with Block Island, boats and the ocean. He constructed the family home on Block Island without the use of electricity.

On Block Island he served as President of the Cormorant Cove Association for 15 years and was an active member of the Committee for the Great Salt Pond, BIMI and the Block Island Yacht Club.

He’s survived by his loving wife and partner of 57 years Renate, his brother Lance, his children Ian, Sean and Erik and six wonderful grandchildren who were a constant source of happiness: Connor, Annika, Christopher, Alexandra, Digness and Caroline.

Ashes will be scattered on Block Island, RI, and the Compton Dando cemetery in Somerset, Great Britain, his ancestral resting place. Two memorial gatherings will be held in his honor in the spring of 2019; dates and locations to be determined.

Ashes will be scattered on Block Island, RI, and the Compton Dando cemetery in Somerset, Great Britain, his ancestral resting place. Two memorial gatherings will be held in his honor in the spring of 2019; dates and locations to be determined.

Share Your Memory of
Alan
Upload Your Memory View All Memories
Be the first to upload a memory!
Share A Memory
Plant a Tree