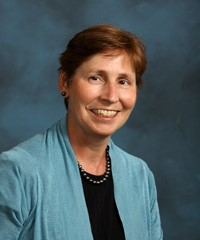 Katherine (Kaca) Burnett Enquist died in her home on January 12, 2019, in Old Greenwich, Connecticut, after a long battle with metastatic breast cancer. She was 58.

Kaca was born on May 26, 1960, in Ayer, Massachusetts, to her parents, C. Donald and Jara Burnett. She graduated from Greenwich High School and Colgate University. After receiving her CPA, Kaca started a 33-year career at Goldman Sachs in 1985 on the same day she had her first date with her husband-to-be, John Enquist.  They married in 1988.

After settling in her hometown of Riverside, Kaca and John welcomed their first child, Annabel, in 1992. A year later the family moved to London for jobs in finance. While residing in London, their son John Junior was born in 1995. The family moved back to Connecticut the following year where they have lived ever since.

Kaca was excited and challenged by her job at Goldman Sachs. Over the years she rose through the ranks ending her career as a managing director in the merchant banking division, raising money and investing around the world. There she made many close friendships that she cherished her entire adult life.

Despite her high-powered career, Kaca was also a devoted mother to Annabel and John. She logged countless hours sitting by pools at swimming and diving meets and water polo games. Her ability with numbers made her the go-to person to calculate diving scores. Wherever the children were competing, she would go to watch them, even as they continued their sports in college.

Kaca loved traveling with her family. From the instant they were old enough to get on an airplane, the kids joined Kaca and John on trips all over the world. But her favorite place to get away was the family home in Key West, Florida. It was Kaca’s “happy place,” where you’d find her sipping a glass of rose and making dinner reservations poolside.

As the children transitioned from college to careers, they came to depend on their mother as advocate and mentor. Kaca was happy to see both Annabel and John settle into careers in their chosen fields.

Kaca is survived by her husband, daughter and son; her parents, C. Donald and Jara Burnett of Riverside, Connecticut; sister Tina (Ted) Baldwin of Winnetka, Illinois; brother Misa (Sarah) Burnett of Old Greenwich, Connecticut; nieces and nephews Teddy and Annie Baldwin, Sasha and Lizzie Burnett, Claire and Eleanor Mancheski, Hugo and Gus Compton and Kate, Meg and William Enquist. She was preceded in death by her grandparents on both sides.

The family would like to thank the many people who helped during Kaca’s last months in the hospital and at home. Your devotion was a testament to the life she lived and the friends she made.

There will be a Remembrance for Kaca AT 3:00 PM on Saturday, January 19 at Innis Arden Golf Club, reception to follow. All are welcome to attend. In lieu of flowers, memorial donations can be made to the Union College Swim Team, c/o Scott Felix.

Check made to: Union College

To extend personal condolences to the family, please visit www.nutmegcremation.com

A gathering for family and friends

There will be a Remembrance for Kaca AT 3:00 PM on Saturday, January 19 at Innis Arden Golf Club, reception to follow. All are welcome to attend.

In lieu of flowers, memorial donations can be made to the Union College Swim Team, c/o Scott Felix. Union College 807 Union Street Schenectady, NY 12308 Check made to: Union College

Share Your Memory of
Katherine
Upload Your Memory View All Memories
Be the first to upload a memory!
Share A Memory
Plant a Tree