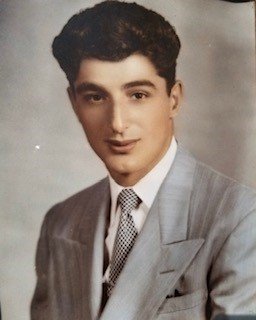 Joseph P DiRollo was called to heaven on March 5, 2021 He was 92 years old. A resident of Norwalk, CT for 61 years and Port Chester, ,NY.. Joe was a small business owner in Darien, CT for 21 years and 10 years in Greenwich, CT, and also lived in Port Chester, NY. Born on February 18, 1929 in Mamaroneck New York to Theresa and Peter DiRollo. Joe grew up with 4 sisters and 4 brothers. At a young age while attending school he would often work at jobs to earn extra money. Knowing How hard it was for his family to get jobs during the depression he would give any money earned To his Mother. He was a very devoted Son. He attended F.E. Bellows High School where he was class president for 2 years and was extremely well liked. In addition, he excelled at football( his jersey was #86) track and any sport he tried. He was a good team member. After graduating High School; he enlisted in the Army where he worked at procurement. It was During this time that he became engaged to Marry his sweetheart Mary Alonzo. Once his commission Was completed. , Joe attended Westchester College where he earned his degree in Mechanical Engineering in which he worked for many companies until he was 35. It was at this time he took a chance at owning his own business with his wife by his side. Joe and Mary moved to CT where they had 3 children; 2 daughters and 1 son. Whenever Joe took his family out to dinner he would say “order whatever you like” and he meant it! Generous to Default he always felt sorry for the underdog, and would accept checks that without a doubt would bounce! Dad ran the business and Mom handled all the finances. Together they were a great team! Although at times it became a challenge; when Dad loved to feed the homeless and Mom would tease him and say “Joe I know what we’ll do; we Hang a big sign that says free soup and bread and you can feed the hungry all day long”. This is a little insight Into there relationship and how they balanced each other and showed there love. Joe loved many things playing golf, gardening and horses which he owned for a time. He enjoyed racing The horses and taking care of them himself. Throughout the years Joe worked long hours so that he could provide his wife and children with the best he could. He retired at 76 after suffering from carpel Tunnel. But He never became idle; always getting part time jobs and later on became very devoted to his wife who became so ill. Even after his Children tried to send him on a trip to Italy; he said no I can’t go without your Mother; he would never leave her. Joe is survived by 2 daughters and 1 son; Dana DiRollo of Norwalk, CT and Cheryl DiRollo of Scottsadale, AZ, Mark DiRollo of New Canaan, CT. In addition to 3 sisters: Philamenia, Francis and Mary. Many nieces and nephews and grand nieces And nephews; Linda Esposito, Marliena Esposito and Lisa Esposito Khan and Her husband Mohamed. Michael DiRollo all of Cary, NC. Peter Margotta, Sue Margotta Stephanie and Carol Ann. Howard Eberwein Jr., Ann Eberwein, Theresa Tocci, Daniel LaRusso, Ricky LaRusso Wendy LaRusso and Peter DiRollo. He is predeceased by his wife Mary, his sister in law Rosalyn DiRollo and her husband James J DiRollo Sr, His nephew James J DiRollo Jr. A long with his brothers Angelo, Thomas and his sister Gloria DiRollo Tocci. As well as there husbands. His Mother Theresa DiRollo and Father Peter DiRollo. Joe was a parishioner at St. Mathews Church and a honorary member of Wee Burn Country Club. He enjoyed a healthy life until 91. As he turned 92 cancer rob him of a few more years. But we are all grateful that he did not have to suffer any more. He was a devoted Husband, Father and employer. Loyal to default even if it meant he had to take the difficult path that’s what he would do! Mary and Joe left there Children a legacy…there love and the home they all grew up in. Rest my warrior it is time to lay your sword down, rest. Mass will be held at St. Mathews Church in Norwalk, CT on March 23, 2021 10:00 am In lieu of flowers the family requests donation to the American Cancer Society.

Share Your Memory of
Joseph
Upload Your Memory View All Memories
Be the first to upload a memory!
Share A Memory
Plant a Tree