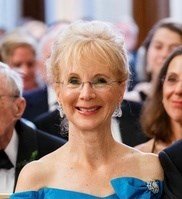 Nancy Freedman Peters of Riverside, CT passed away peacefully on July 13, 2021 surrounded by close family. She was 68 years old. The cause was breast cancer. She was born in New York City on August 25, 1952 to the late Jerome and Florence Freedman. She attended Rye Country Day and Vassar, before completing her BA in American History at Wesleyan in 1974. At Vassar, she met Steven Peters, whom she would later wed. Nancy received a MA in Communications and Journalism at Stanford and an MBA from Columbia. She worked for both NBC and Citibank in New York City. In 1982, she married Steven M. Peters after the two reconnected while working in New York. They lived in Harrison, NY where they had their first son, L. David, before moving to Riverside, CT, where she and her husband resided until her death. In Riverside, they also had their 2nd son Alex, and daughter Diana. Nancy was a loving mother dedicated to the support of her children and the community, serving in roles which included President of the PTA at the Mead School, which each of her children attended. Until her death, Nancy was Chairperson and past-President of Jewish Family Services of Greenwich. A lover of the arts, she attended theater, opera, dance, and music performances locally and in New York as well as at her summer home in Chautauqua, NY, and was a founding board member of Pegasus Contemporary Ballet in Dallas, TX. She is survived by her loving husband Steven Peters, and by their children and spouses: L. David Peters and Karin Reiss, Dr. Alexander Peters and Melissa Hochman, and Diana Peters Crowder and Jonathan Crowder; by grandson Jerome Samuel Peters; by sister Dr. Susan Freedman and brother-in-law Dr. Mark Zeidel; by sister-in-law Anita Peters; and by five nieces and nephews and their families. A memorial service will be held at Greenwich Reform Synagogue on Sunday July 18 at 2:00pm. For those unable to attend, or those who have not yet been fully vaccinated against COVID, a livestream broadcast will be available through the synagogue. In lieu of flowers, the family requests donations to be made in Nancy's honor to either Jewish Family Services of Greenwich (www.jfsgreenwich.org), and/or The Nancy & Steven Peters Fund for the Arts, Education and Social Responsibility a family DAF which supports nonprofit organizations valued by Nancy (the contribution form may be downloaded here: https://tinyurl.com/NancyMemorialFund) To plant trees in memory, please visit our Sympathy Store.

Share Your Memory of
Nancy
Upload Your Memory View All Memories
Be the first to upload a memory!
Share A Memory
Plant a Tree